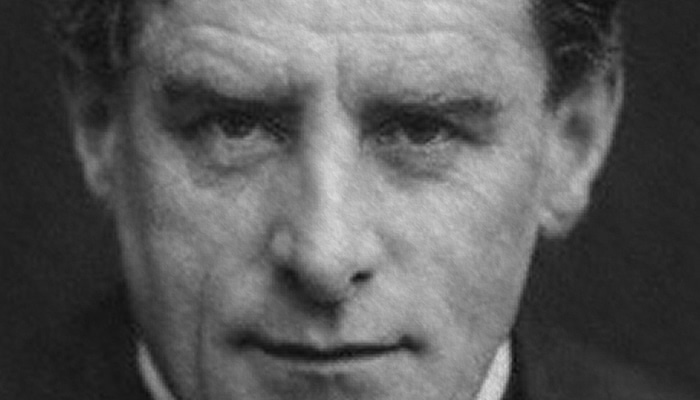 Walter Sickert (1860-1942) was born in Germany, but settled in England with his family at age 6. He became one of the most influential British artists of his era, transitioning from the Impressionist to the Modern period and challenging Victorian moral sensibilities.

Sickert founded the Camden Town Group in 1911, which supported the work of avant-garde artists. He also taught at Westminster School of Art, and even became painting-buddies with Winston Churchill later in life. He was married three separate times and spent considerable time in Venice and France for painting trips.

As an artist who pushed the boundaries of Victorian moral conventions, Sickert often focused on painting shadowy interiors and lower class and suburban Victorian scenes, including scenes that suggested violence.

Sickert’s interest in the darker side of Victorian life as well as Jack the Ripper’s persona played into many of his paintings. One painting in particular was specifically named for the shadowy and elusive Whitechapel murderer.

One of Sickert’s landladies confided that she believed a former tenant had been the Whitechapel murderer. The murderer was supposed to have stayed in the very room Sickert inhabited, and this mystery captured Sickert’s imagination. It inspired the painting “Jack the Ripper’s Bedroom”, a brooding portrait of a faceless man standing backlit inside a heavily shaded room.

Throughout his life, Sickert maintained interest in the murders and continued to paint the same type of Whitechapel and East End residents that comprised the Ripper’s victims. Sickert’s focus on the poor, prostitutes, and actresses (who were viewed as on par with prostitutes), resulted in criticism from the Victorian mainstream for being tawdry and vulgar.

The Case for Walter Sickert Being Jack the Ripper

Stephen Knight first planted the idea of Sickert’s complicity in the murders with 1976’s Jack the Ripper: The Final Solution. According to Knight, who was communicating with an informant named Joseph Gorman, Sickert had been part of a conspiracy involving Freemasons and the throne. Knight argues that Sickert did not wield the knife, but that he was an accomplice. He was, according to Gorman, one of the witnesses at the clandestine wedding of crown prince Albert Victor and working-class Annie Crook (along with the canonical five Ripper victims), and therefore was culpable in the ensuing conspiracy. This conspiracy involved well-heeled men in carriages picking up the victims and depositing their mutilated bodies along with cryptic Masonic symbols.

Crime author Patricia Cornwell is perhaps the most famous and adamant proponent of Sickert’s guilt, which she argues in her book Portrait of a Killer: Jack the Ripper–Case Closed. Her main corroborating evidence is an mtDNA (mitochondrial DNA) sequence found on some of the purported Ripper letters. Her investigation revealed that this mtDNA matched some of the strains found on the letters that Sickert sent during his lifetime. Cornwell claimed that the mtDNA matched only one percent of the population, and was therefore very likely to be Sickert’s.

Cornwell also claims that Sickert was impotent due to a fistula on his penis. She sustains that many modern serial killers have been impotent, leading to misplaced sexual desire and hatred of women. She also argued that many of his paintings exhibit women’s nude bodies in postures reminiscent of the Ripper killings.

Indeed, Sickert was famous for his un-romanticized female nudes, which departed from impressionistic nudes and unsettled viewers of the time. One famous example is his painting What Shall We Do for the Rent?, depicting a nude woman lying on a bed and a man sitting on the side of the bed with his head lowered and hands clasped. To play on the sensation surrounding the grisly murder of a local prostitute in 1907, he renamed the painting The Camden Town Murder. Despite these suggestive images, none of Sickert’s paintings directly display dead or mutilated women’s bodies.

The Case Against Walter Sickert Being Jack the Ripper

Most Ripper experts contend that the “Dear Boss” letter, referenced by Cornwell as being a match to Sickert, is inauthentic. In fact, police officials of the time announced that they believed the letters to be a hoax written by journalist, Tom Bullen, in order to cash in on Ripper hysteria. If the DNA on those letters did, in fact, belong to Sickert, he may have been guilty of participating in the Ripper hoaxes.

Multiple plot holes discredit Stephen Knight’s account of the Ripper conspiracy, not the least of which was ample forensic evidence that the murdered women were all killed on the spot rather than moved by carriages (one of Knight’s major arguments). Additionally, Gorman came forward after the book was published, and said to The Sunday Times that his story was “a hoax … a whopping fib”.

One of the most compelling pieces of evidence that Sickert was not Jack the Ripper, however, was the fact that he was very likely not in London at all at the time of the murders. Reporters from The Sunday Times also brought forward that Sickert was with his mother and brothers in France during the late summer of 1888 during the time the murders were taking place in Whitechapel.

In summary, all that truly implicates Sickert in the murders is a fascination with Jack the Ripper himself as well as the darker side of Victorian life. If such interests make one a murder suspect, then Ms. Cornwell as well as the writers and readers of Whitechapel Jack have some explaining to do.

Few fictional documents dare to enter the skull of Saucy Jacky himself. They prefer to trot along on the periphery, showing us all the historical evidence we’ve seen time and time again from the same … END_OF_DOCUMENT_TOKEN_TO_BE_REPLACED

Many people, upon hearing that they are the progeny of a mass-murderer, bury this fact and shy away from it as much as possible. Jeff Mudgett, a lawyer and former Commander in the U.S. Naval Reserve, … END_OF_DOCUMENT_TOKEN_TO_BE_REPLACED

Jack the Ripper: The Forgotten Victims by Paul Begg & John Bennett Yale University Press (March 1, 2014) There are at least four or five victims that we can (mostly) agree were killed by the … END_OF_DOCUMENT_TOKEN_TO_BE_REPLACED