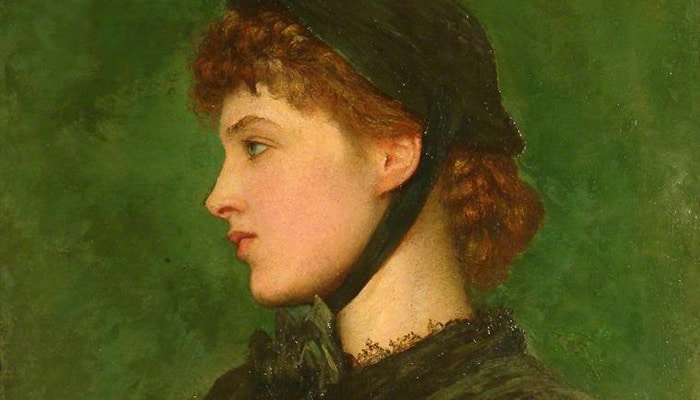 Whether it be for a themed gathering or perhaps inspiration for a Halloween costume, if you're looking for information pertaining to Victorian Era women's fashion, you've come to the right place. This handy guides examines what sort of clothing and accessories would have been popular or practical during the time of the Ripper Murders in Victorian Era London. ( Also see: Victorian Era Men's Fashion)

By the 1880s, women’s fashion in Europe emphasized an inverted triangular shape. That meant wide shoulders narrowing at the waist and continuing to narrow in the skirt all the way to the ankles. 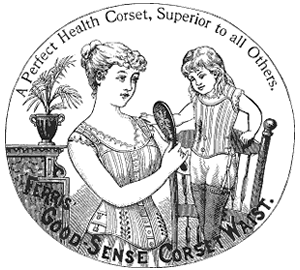 Bustles were no longer in fashion, but all variety of corsets was certainly still in use, at that time called “stays”. These were worn under the clothing, bodices with boning on either side and lacing to hold it together. More affluent women on the other hand, often had the stays as part of the outfit themselves.

Of course, the ladies of Whitechapel in the late 1880s weren’t necessarily up on the latest fashions. They mostly wore second hand clothing from the rich, bought from resale vendors or given away by workhouses or women’s charities. The poor women of Whitechapel often wore an amalgamation of styles from previous years and even decades.

Most of the Ripper’s victims were restricted to wearing a combination of workhouse clothing, cast-offs, and even clothing that had belonged to men; however, there could have been a few more stylish pieces in the mix. Polly Nichols, for instance, had her beloved black bonnet. Mary Kelly, also, had accompanied well-to-do men on trips to Paris, and perhaps owned some more fashionable pieces. 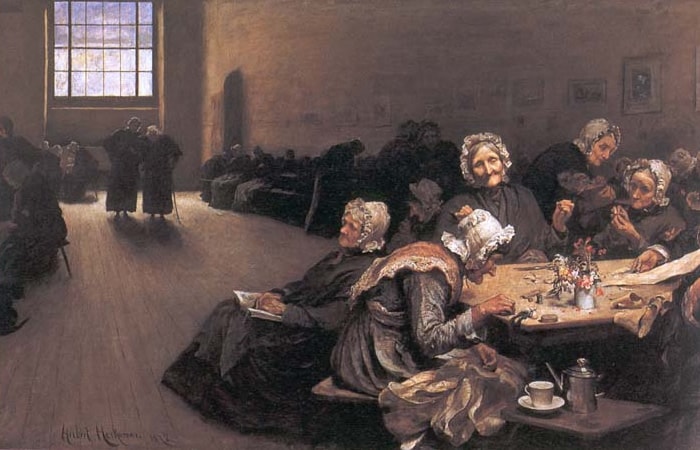 Eventide: A Scene in the Westminster Union (workhouse)
by Sir Hubert von Herkomer
Shown are examples of ladies' workhouse attire

Shirts could range from simple button-downs to more ornate and complicated. To comply with the stylish inverted triangle, the shirts often fit closely around the wrist and often had a decoration around the wrist such as a laced cuff or ruffle. Shirts also became wider moving up the arm and toward the neck and shoulders using bibs as well as ruffles.

By the time the 1880s rolled around, tops were tailored closer to the body. Women commonly wore riding habits with what could be considered a precursor to the modern work-suit: jackets that cinched at the waist and form-fitting skirts. Victorian jackets also were often trimmed with fur or other sorts of piping.

Women often wore dusters to protect their clothing, which would reach to the floor and be fastened with buttons. For the poor, these buttons were often made of brass. Some of the Ripper victims, including Polly Nichols, wore ulster coats. These were heavier, double breasted overcoats, that were usually considered to be men’s coats. They were usually made of tweed or some other type of heavy fabric.

For a warm summer nights and busy days in the crowded Whitechapel streets, the common overcoat could have proven too hot. In that case, a shawl could suffice. Mary Jane Kelly was last seen wearing a red knitted shawl slung about her shoulders, and if Russel Edwards is to be believed, Catherine Eddowes was found in possession of an ornate silk shawl. Jewish immigrant women commonly wore substantial shawls, but lighter, more delicate shawls were also common in Whitechapel. 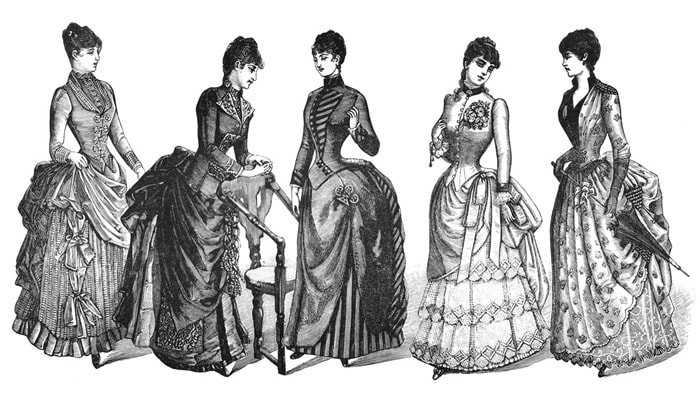 Beginning in the 1870s, there were a number of different types of skirts that were widely worn. Tiered skirts could be anywhere from relatively loose to tapered down at the ankles. Overskirts began to be popular around the 1860s, and would have endured through the 1880s and 90s in an area where earlier fashions were in wide circulation. Ruffles, ribbons and other trimmings abounded.

Types of skirts and dresses varied. One type of skirt was “Chintz”, which was a general term for calico textiles imported from India. This fabric was used for everything from clothes to curtains and was often characterized by floral patterns. Catherine Eddowes was wearing a green one of these patterned with daisies and golden lilies.

Linsey frocks were made of a coarse combination of linen and wool. They were not stylish, but they were practical and warm. Polly Nichols was found wearing a new linsey frock, presumably stolen from the Cowdry family, her old employers.

Due to the throwback styles worn in Whitechapel, the women often wore more than one skirt over a woolen or flannel petticoat or two (often supplied by a local workhouse). Jewish immigrants from Russia and Eastern Europe made up a large part of the Whitechapel population, and brought along their own, simple way of dressing. These skirts were usually floor length with an even hem and no ruches or tiers, and made of a single type of textile rather than a combination (Jewish law prohibited mixing different fibers, such as was found in linsey).

Boots made with satin or kid and finished with uppers of fine cloth were common among well-off Victorian women. Beginning in the 1860s and stretching into the 1880s and 90s, heels began to be added to boots as well. These luxuries were rarely found in Whitechapel, however, and women often wore rougher, leather men’s boots. Both men and women’s boots usually laced up over the ankle, and often had elastic or “spring” siding to allow for flexibility. 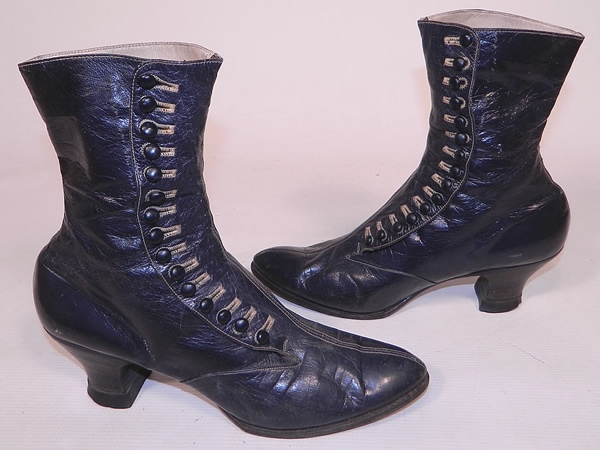 Stockings were practical for the ladies of Whitechapel, and made of wool to keep their legs warm. Varying shades of gray, black and white as well as patterns for these stockings was not out of the question, however, even for the poor. In this era, the prices for dye were going down as well, and it was easier to produce colored textiles. Many were patterned with stripes and ribbing to give the stockings texture. They could be found as tights up over the waist or as knee-highs. 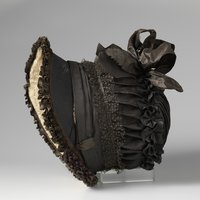 Small brimmed hats were favored in the 1880s, including toques (brimless predecessors of the modern “beanie”) and tiny bonnets that sat high on the head. One can call to mind the example of Polly Nichols’ “Jolly Bonnet”, which was made of straw and had black velvet trim.

Snug-fitting gloves were almost compulsory. Many Whitechapel women would have worn the shorter, light colored gloves that were the style in previous decades; however, in the 1880s, three-quarter gloves reaching to just under the elbow came into vogue, popularly black.

Few fictional documents dare to enter the skull of Saucy Jacky himself. They prefer to trot along on the periphery, showing us all the historical evidence we’ve seen time and time again from the same … END_OF_DOCUMENT_TOKEN_TO_BE_REPLACED

Many people, upon hearing that they are the progeny of a mass-murderer, bury this fact and shy away from it as much as possible. Jeff Mudgett, a lawyer and former Commander in the U.S. Naval Reserve, … END_OF_DOCUMENT_TOKEN_TO_BE_REPLACED

Jack the Ripper: The Forgotten Victims by Paul Begg & John Bennett Yale University Press (March 1, 2014) There are at least four or five victims that we can (mostly) agree were killed by the … END_OF_DOCUMENT_TOKEN_TO_BE_REPLACED