You are here: Home / The Ripper Letters
825 Shares

During the period of the Ripper murders, the media, police and other officials had received a sea of letters. The Whitechapel Murders had created such a media frenzy that many local citizens found it irresistible to not want to be a part of this sensational investigation.

Some of the letters were sent by concerned citizens offering their support in the ongoing investigation, yet hundreds of letters were written by pranksters – with the intent of taunting police. Apart from a few well-intentioned letters from Whitechapel citizens hoping to aid police in their efforts to apprehend Jack the Ripper, the bulk of these letters were crass, distasteful or simply worthless.

Several of the ‘Ripper Letters' were written as if by the killer himself. The vast majority of them, if not all, were believed to be hoaxes. Yet, there are three letters that stand out in particular… 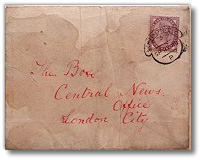 The Dear Boss Letter, which was dated September 25th, was received by the Central News Agency on September 27, 1888, the same day as its postmark. This letter was then sent on to Scotland Yard two days later.

Though initially viewed as a prank, the Dear Boss Letter quickly gained attention after Catherine Eddowes' murder on September 30th. In the letter, the author made mention of clipping off his next victim's ears. Eddowes was found with one earlobe severed.

In the same manner as the other famed Ripper Letters, the Dear Boss Letter is rife with misspellings, as well as grammatical and punctuation errors. 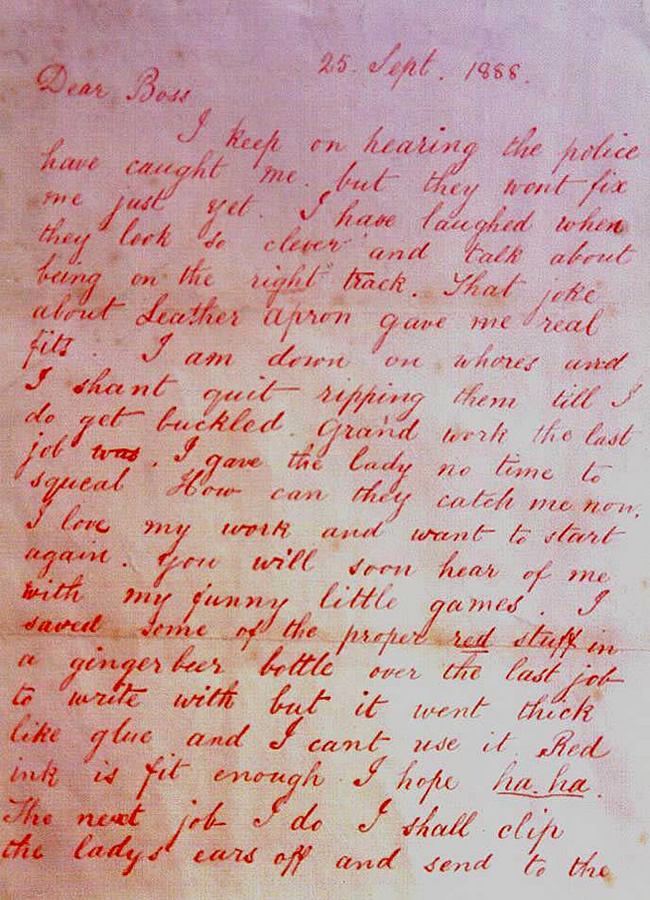 Facsimile of the Dear Boss Letter 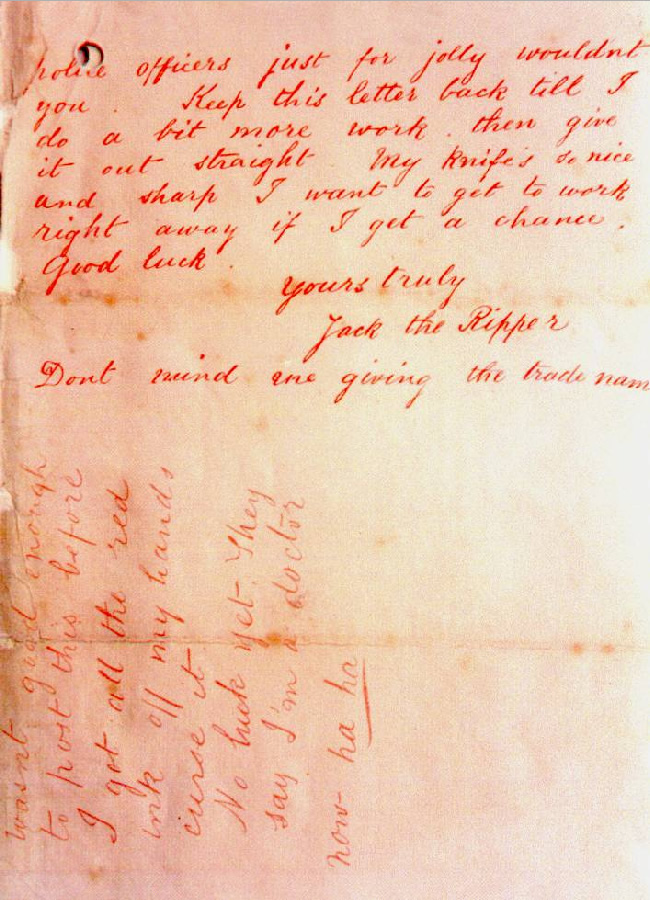 Facsimile of the Dear Boss Letter

I keep on hearing the police have caught me but they wont fix me just yet. I have laughed when they look so clever and talk about being on the right track. That joke about Leather Apron gave me real fits. I am down on whores and I shant quit ripping them till I do get buckled. Grand work the last job was. I gave the lady no time to squeal. How can they catch me now. I love my work and want to start again. You will soon hear of me with my funny little games. I saved some of the proper red stuff in a ginger beer bottle over the last job to write with but it went thick like glue and I cant use it. Red ink is fit enough I hope ha. ha. The next job I do I shall clip the ladys ears off and send to the police officers just for jolly wouldn't you. Keep this letter back till I do a bit more work, then give it out straight. My knife's so nice and sharp I want to get to work right away if I get a chance. Good Luck.

PS Wasnt good enough to post this before I got all the red ink off my hands curse it No luck yet. They say I'm a doctor now. ha ha

The Dear Boss Letter is arguably the most famous of the three most prominent “Ripper Letters”, as it marked the first usage of the moniker that would later become legend… the author signed it,

The Dear Boss Letter, along with the Saucy Jack Postcard, were published by Metropolitan Police and handed out to citizens in hopes that someone would be able to identify the handwriting, yet nothing came of it. Newspapers also reprinted the messages, creating a worldwide media frenzy and increasing the celebrity of Jack the Ripper.

Some sources claim there was a previous letter, which had been dated September 17th, in which the author referred to himself as Jack the Ripper. However, most experts discount that letter as a modern day hoax which was placed in police records during the 1900s, well after the time of the murders.

While not well publicized, police officials later stated that they believed the Dear Boss Letter and Saucy Jack Postcard to be the work of a local journalist by the name of Tom Bullen.

Years later, in 1931, a journalist named Fred Best reportedly confessed to writing the Dear Boss Letter and Saucy jack Postcard in an attempt to “keep the business alive”. It is not known if his claims were genuine, but it is probable.

Shortly after the investigation ended, the Dear Boss Letter came up missing from police files. It's believed that one of the investigating officers in the Ripper case had kept it as a souvenir. In 1988, nearly a century after the case had been closed, it was returned to Metropolitan Police by an anonymous party. 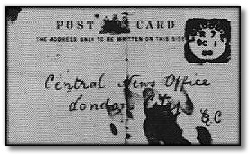 The Central News Agency received the Saucy Jack Postcard on October 1, 1888, the same day as its postmark. The writer's handwriting on the postcard was very similar to that seen in the Dear Boss Letter. The Saucy Jack Postcard makes mention of a “double event“, which was obviously in reference to the murders of Elizabeth Stride and Catherine Eddowes, both of which occurred the morning of September 30th.

I was not codding dear old Boss when I gave you the tip, you'll hear about Saucy Jacky's work tomorrow double event this time number one squealed a bit couldn't finish straight off. Had not got time to get ears off for police thanks for keeping last letter back till I got to work again.
Jack the Ripper 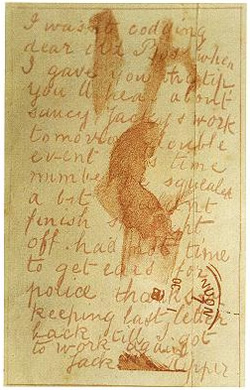 Facsimile of the Saucy Jack Postcard

It's worth noting that part of Eddowes' ear was found severed at the crime scene. Some believe this was an unintentional result of the facial mutilations that the killer performed. Others argue it was deliberate.

Another topic of debate has been whether or not the postcard was sent prior to the murders, or afterward. Some suggest that the message was sent before news of the murders hit local papers, thus substantiating the fact that it was written by someone with firsthand knowledge of the crime. Others argue that because the letter was postmarked more than 24 hours after the killings, it was likely a hoax since most details surrounding the murders were already being reported by the media.

Police later claimed to have identified journalist Tom Bullen, as the author behind both the Saucy Jack Postcard and Dear Boss Letter.

Years later, journalist Fred Best came forth with a confession, claiming to be responsible for both the letter and postcard.

The From Hell letter is arguably the most disturbing and noteworthy of the three most prominent Jack the Ripper messages. This is mainly due to how the letter arrived… inside a small box, accompanied by half of a human kidney. Coincidentally, Catherine Eddowes' killer had removed one of her kidneys.

This letter is also distinct in that not only is the handwriting unique, but the writer also left it unsigned. The From Hell Letter also appears to be penned by someone with even less literary prowess than those responsible for the Dear Boss Letter and Saucy Jack Postcard. 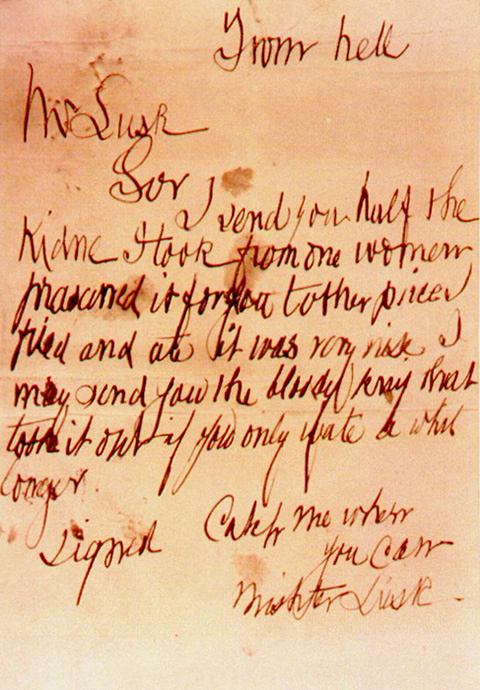 The infamous “From Hell” Letter

The letter, postmarked October 15, was received by George Lusk, head of the Whitechapel Vigilance Committee, on October 16, 1888.

From hell
Mr Lusk,
Sor
I send you half the Kidne I took from one women prasarved it for you tother piece I fried and ate it was very nise. I may send you the bloody knif that took it out if you only wate a whil longer
signed
Catch me when you can Mishter Lusk

The kidney had been preserved in alcohol and was in fact confirmed to be that of a human female's. Lusk, along with members of the medical field, believed the kidney and accompanying message to be a practical joke played by medical students who'd obtained the organ from a cadaver. 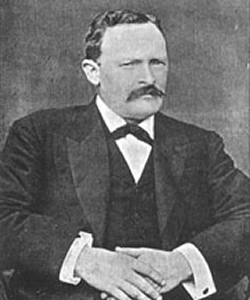 Dr. Thomas Openshaw, the physician who examined the kidney, concluded that it had come from a woman about 45 years of age, who also suffered from Bright's Disease. This disease is a failing of the kidneys as a result of heavy drinking.

Catherine Eddowes was 46 at the time of her murder and was known to drink quite heavily.

Like much of the other evidence in the Jack the Ripper case files, the From Hell Letter and accompanying kidney have either been lost or stolen. All that remains on file is a photograph of the letter taken before its disappearance.

How many letters were received during the time of the Ripper Murders?

It's not exactly known just how many letters were received by authorities, media and other notable figures in Whitechapel during the time of the murders, but it's possible the number may have totaled a few thousand. In the October 20, 1888 edition of The Illustrated Police News, it was reported that over 700 letters had been investigated by police.

Since most of these letters were either discarded, lost, or later destroyed during the bombings in WWII, we can only guess as to what the actual number may have been, but we do know that as many as 300 of the letters are still preserved at the Corporation of London Records Office.