You are here: Home / Ripper Investigation / The Debacle of Burgho and Barnaby
31 Shares

…And a few terrible dog-themed puns. 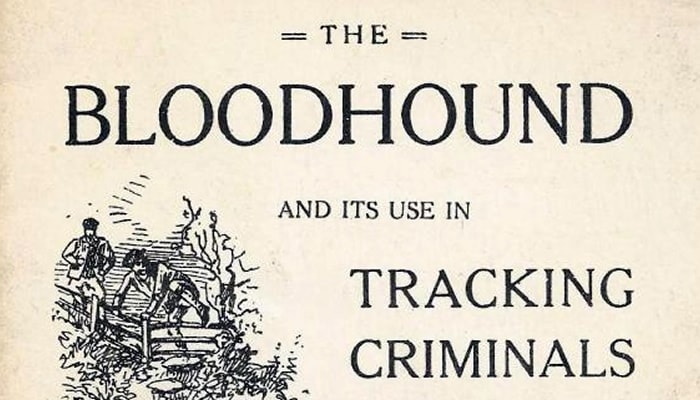 Those familiar with the Ripper case know that the press at the time were highly critical of the Metropolitan Police’s inability to discover the murderer's identity. Desperate to show the public that they were making progress on the case, their frustration spurred some unconventional investigative experiments.

One experiment that ended up biting them in the butt, so to speak, included employing a duo of bloodhounds named Burgho and Barnaby. 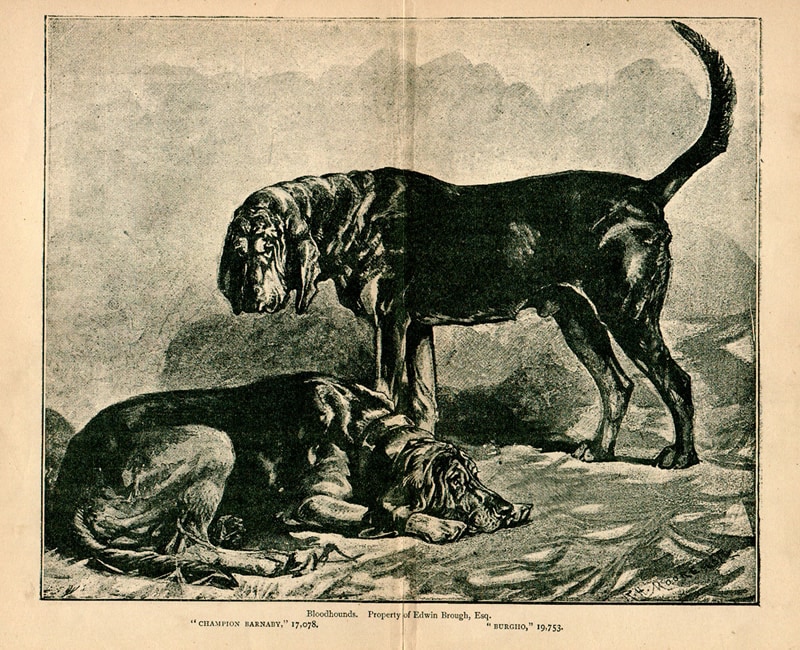 After the murders of Elizabeth Stride and Catherine Eddowes at the end of September, some citizens suggested that hounds may be able to catch a killer that had so far eluded police. A bloodhound breeder named Percy Lindley wrote the most confident endorsement of all in an editorial letter to The Times.

“I have little doubt that, had a hound been been put upon the scent of the murderer while fresh, it might have done what the police failed in,” Lindley wrote.

His letter, published on the 2nd of October, two days after the “Double Event,” inspired the Metropolitan Police’s experiments with sniffing dogs to begin immediately.

The following is a transcript of an official police letter written by Sir Charles Warren in response to Percy Lindley's statement in The Times:

I have seen your letter in the Times on subject of bloodhounds and perhaps you could answer a question I have put to many without satisfactory reply.

If the murderer left a portion of his clothing behind and some of his blood I can understand a dog following up or if you could show him a particular spot where he had been standing even but on a London pavement where people have been walking all the evening there may be scores of scents almost as keen as those of the murderer. This seems to me to be the initial difficulty and I should be glad if you could give me a solution to it.

Would a hound follow up a person on whose hands was the blood of a murdered person if he is shown the blood on the ground. I scarcely think he could.

Despite his initial doubts, the commissioner would agree to move forward with the experimentation of employing Bloodhounds as a way to track the killer. 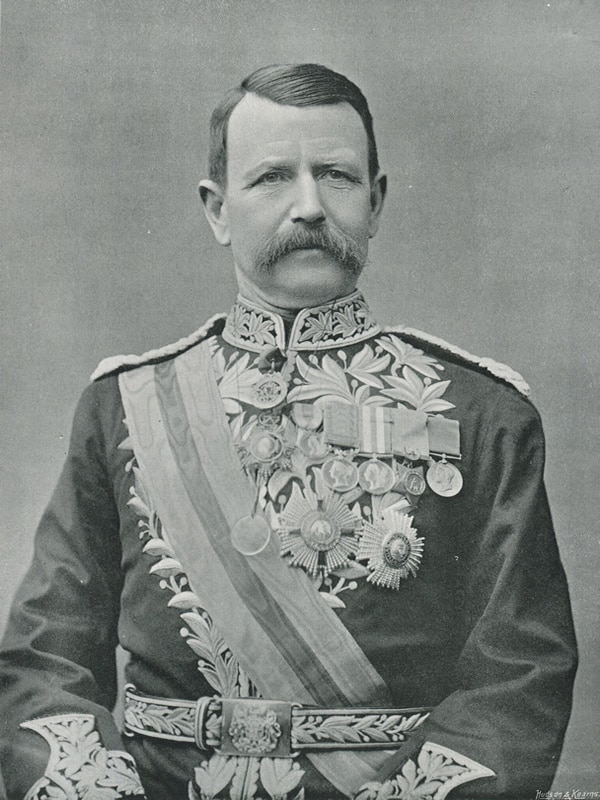 Police commissioner Sir Charles Warren was under the most intense scrutiny that the newspapers and citizenry could dish out, and he had high hopes for the hounds. Unfortunately for him, the system to get them on the “scent of the murderer while fresh” would prove difficult to streamline.

Up until this point, dogs had been borrowed from private owners when they were needed for police work. Sir Charles intended to buy dogs to be always kept at the police department, something Lindley had suggested in his letter.

Mr. Edwin Brough, a Bloodhound breeder from Scarborough, brought forward his finest hounds, Burgho and Barnaby, to test for the position with the Metropolitan Police. Sir Charles was cautious, however, fearing that the hounds would not be as up to snuff as their owner claimed. He didn’t want to buy them until he was certain they could do the job.

The dogs were run through several drills during October to prove their abilities, training across the city in open locations such as Regent’s Park and Hyde Park. They tracked the scents of various subjects who were given head starts of fifteen minutes or so. Sir Charles himself even acted as the hunted man during at least one drill.

The press continued to prod at the police over the hound experiment. On the 19th of October, a false news report posited that the hounds were called out on assignment, but had gotten lost in the fog during their search. This was not true, however. The dogs were merely out of reach practicing at Tooting Commons at the time the police sent for them.

The issue that ultimately made the hound experiment go to the dogs was money. 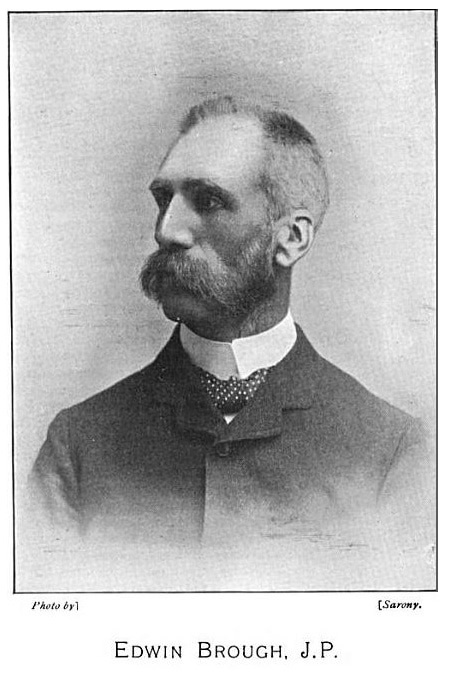 Near the end of October, the police had not made any assurances to Mr. Brough that they would purchase the dogs, or pay insurance or hiring fees. Brough took Burgho to a dog show in Brighton, and hearing nothing, never returned him to police employ. He eventually took Barnaby back from his London handler as well.

Word did not get around the entire CID, however, and the final embarrassment converged with the Ripper’s most grisly murder on the 9th of November. Mary Jane Kelly’s mutilated body was spotted through the window of #13 Miller’s Court at 11:30am. Inspector Abberline, remembering that the hounds had been engaged especially to hunt the Ripper, ordered that the scene not be touched until Burgho and Barnaby arrived to catch the Ripper’s scent. The officers, Inspector, and police surgeon waited for two hours before finding out that the dogs were no longer in London, at which point they finally broke down Kelly’s door.

Who knows whether the bloodhounds would have tracked the Ripper down had they been available. One thing is for certain, however, after a series of embarrassments, Sir Charles Warren chose the fateful day of November 8th – hours before Mary Jane Kelly's murder – to resign. A final twist of irony in his troubled stint as police commissioner.

Note: In an interview conducted in the years following the murders, Brough suggested that perhaps Jack the Ripper had put his killing spree on hold whilst his dogs were in London conducting their drills. This could be pure coincidence, but due to the media hype surrounding the bloodhounds' presence in the city, it is possible that Jack may have determined to cease his activities lest he risk getting tracked by Burgho and Barnaby. The following is an excerpt from an interview in Scarborough Magazine in which Brough discusses his theory as to why the killings ceased in October.

“Our experiments in London showed that the hounds will hunt a man who is a complete stranger to them, and will not change, although the line may be crossed by quite a number of other people. They were not put to the test so far as the Whitechapel Murders were concerned, for no murder was committed during the time the hounds were in London. This I consider some evidence of the deterrent effect which the employment of bloodhounds would have on crime, for another of the ghastly Jack the Ripper tragedies was committed shortly after it was known that the hounds had been sent back to Wyndyate.”

Few fictional documents dare to enter the skull of Saucy Jacky himself. They prefer to trot along on the periphery, showing us all the historical evidence we’ve seen time and time again from the same … END_OF_DOCUMENT_TOKEN_TO_BE_REPLACED

Many people, upon hearing that they are the progeny of a mass-murderer, bury this fact and shy away from it as much as possible. Jeff Mudgett, a lawyer and former Commander in the U.S. Naval Reserve, … END_OF_DOCUMENT_TOKEN_TO_BE_REPLACED

Jack the Ripper: The Forgotten Victims by Paul Begg & John Bennett Yale University Press (March 1, 2014) There are at least four or five victims that we can (mostly) agree were killed by the … END_OF_DOCUMENT_TOKEN_TO_BE_REPLACED