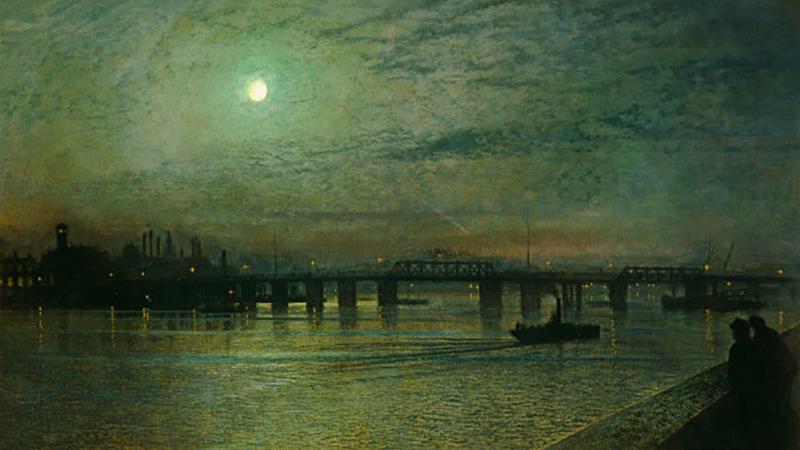 While Jack the Ripper terrorized Whitechapel during the fall of 1888, another unknown killer (or killers) had also been leaving macabre tokens of murder throughout the London area. Like Jack, they taunted police. Like Jack, they were never caught. And, like Jack, they were capable of showing an element of precision that led pursuers to believe they may be a butcher or have medical training.

Unlike Jack, they never compromised that precision with blitz attacks and disembowelment—the remains they left behind were always neatly cut and neatly packaged. Unlike Jack, their taunts were more subtle than the cryptic letters to police and neighborhood watch.

And—if the murders were carried out by a single person—their reign of terror may have lasted much, much longer than a single autumn. From 1873 through 1889, a series of 6 torsos were found in the greater London area. Only one was ever identified.

Whereas we can memorialize the victims of Jack the Ripper by name—see our victim profile page for their stories—we can not do the same for most of the victims of this undiscovered killer. The first two bodies were especially impossible to identify, due to their being discarded in a watery grave. Beware: The following paragraphs go into some especially graphic details.

On September 5, 1873, near the Battersea Pier in the Southwest of London, a police patrol removed the left side of a woman's torso from the mud on the banks of the Thames river. As the day progressed, more parts of the body were found, including the right side of the torso and portions of lungs. The following day, a woman's face and scalp, detached from the head, were found floating in the water off Limehouse. Next came a thigh and right shoulder. 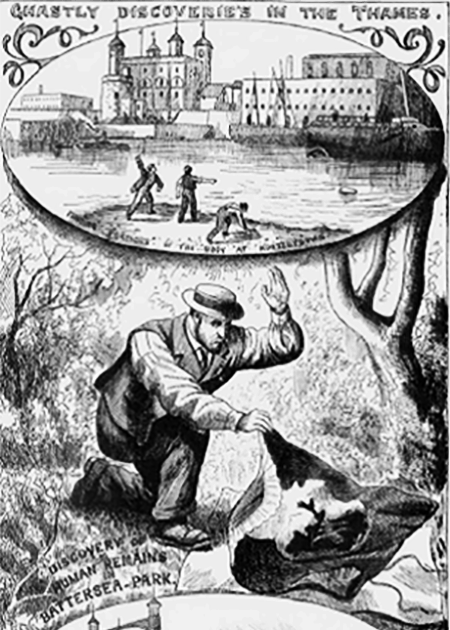 Divisional police surgeon Dr. Kempster and officers reassembled the body as best they could with the parts on a mechanical frame. They even went so far as to stretch the victim’s face over a butcher's block, hoping that it may be recognized by someone whose loved one had gone missing.

Dr. Kempster determined that the victim was very likely around 40 years old with short, thin dark hair. One feature they hoped would make identification easier was a burn scar on her left breast.

Dozens of people who were looking for female middle-aged family members passed through to view the corpse, but no one could be sure that it was who they were looking for. Photos were passed around, a reward was offered, but by September 21, nothing had come of it. The unknown woman's remains were buried at Battersea cemetery.

The following year, another woman's remains were found, missing a head, hands, and feet. She also was unable to be identified. Additionally, while the cause of death was determined to be blunt force trauma to the head for the 1873 victim, investigators were not even able to determine a cause of death for this victim.

But the extent of the verdict for both victims was the same: “Wilful murder against some person or persons unknown.” 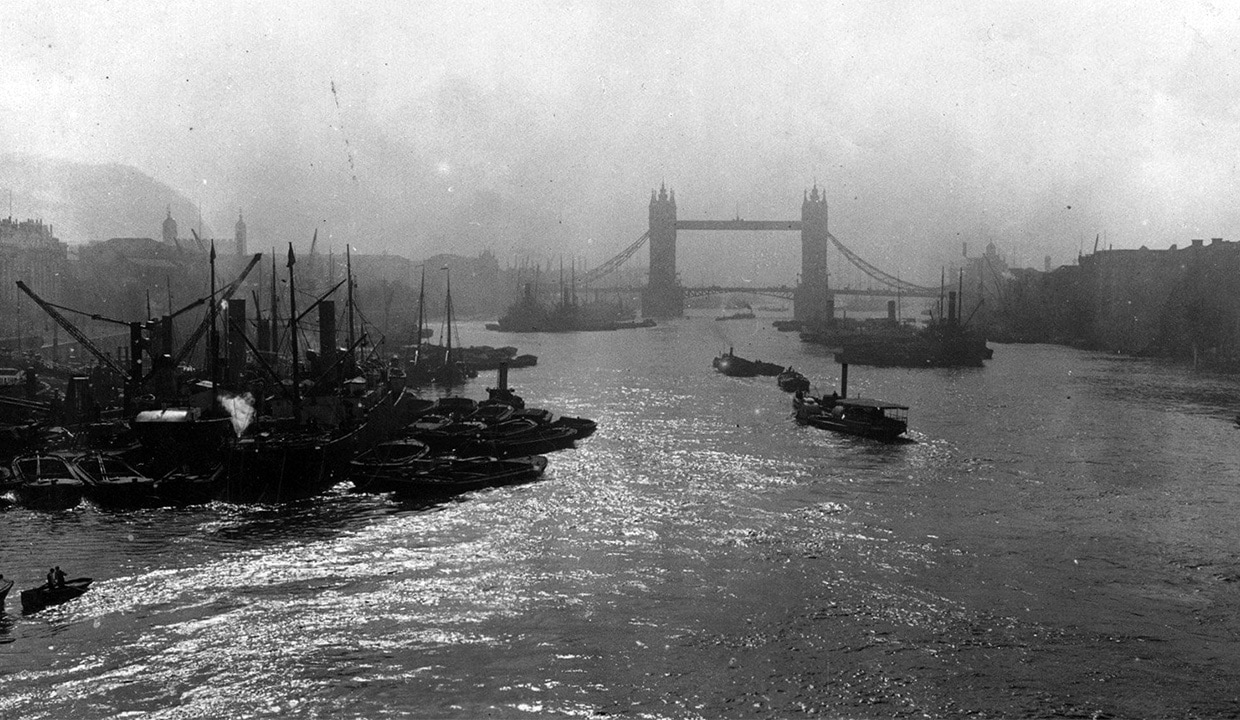 In May of 1887, the first victim of what is considered the “official” Thames Torso Murders was discovered in the Thames near Rainham, wrapped in a bundle.

Over the next several weeks, body parts washed up onto the shore of the Thames until everything but the body’s head and neck had been pieced together. An assistant police surgeon, Dr. Charles Hebbert, examined the remains for clues to the person’s identity, and due to the lack of a head and the long submersion in water, was only able to identify that the victim had been a woman.  Again, the cause of death could not be determined, and the only description on the record for what had happened was that the unknown victim was “found dead.”

September 11, 1888, heralded the start of a gruesome game of hide and seek, later called the Whitehall Mystery. It began with the discovery of a right arm and shoulder on an embankment near Pimlico. Police at first believed it to be a prank carried out by medical students (a common suspicion when any body parts were found). They were not terribly concerned.

At that point, Mary Ann “Polly” Nichols and Annie Chapman had already been murdered on August 31th and September 8th respectively. The “Dear Boss” letter would not be received by the Central News Agency until September 27, three days before the night of the Double Event, and true Ripper hysteria had not reached fever pitch.

Another arm was found on September 28, lying by the side of a road.

On October 2 ,1888 a wrapped-up woman’s torso was discovered by a construction worker in an unfinished vault near Whitehall in Westminster. The construction project was, of all things, for the new Metropolitan Police headquarters. This is one of the first indications that the perpetrator was a morbid prankster, and would continue to taunt police. 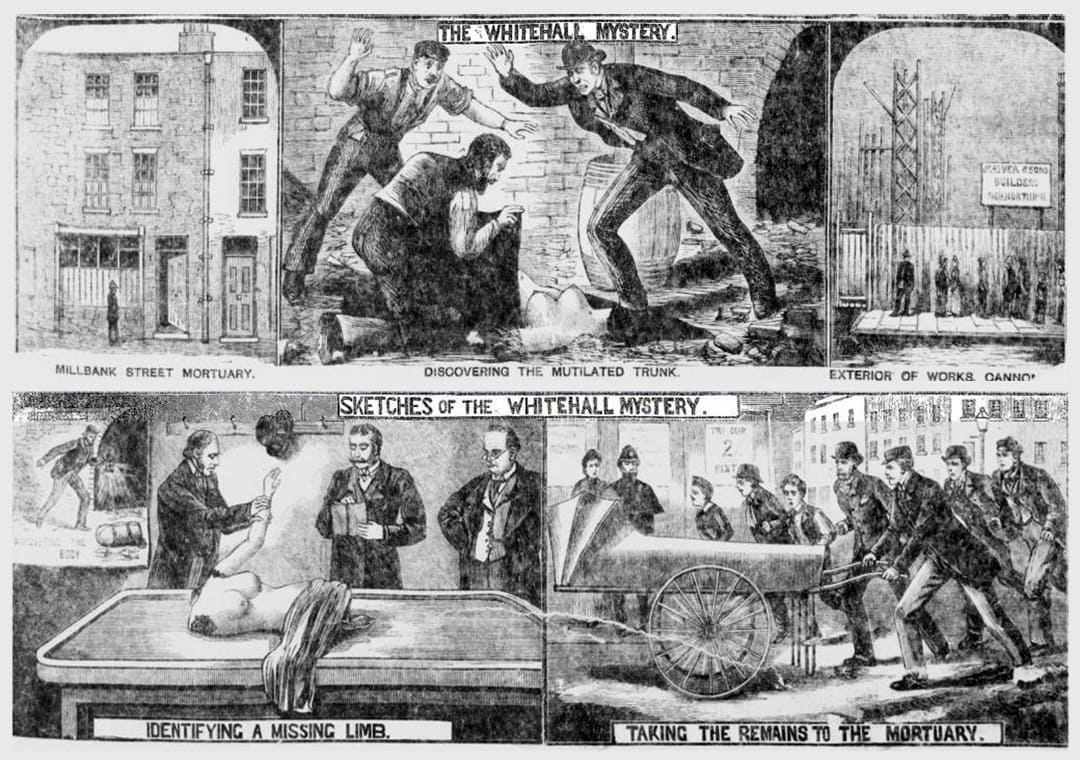 “The Whitehall Mystery” (from the Illustrated Police News, October, 1888)

Dr. Bond, Dr. Hebbert, and other medical professionals noticed that the victim’s right arm had been tourniqueted before the body had been dismembered. They agreed this indicated that whoever had dismembered the body very likely had some medical knowledge, specifically of anatomy. As far as identification went, the Westminster coroner noted that the body was of a woman who was “of large stature and well nourished” and was approximately 24 years old. They were unable to determine the cause of death, so again, the jury at the inquest could only declare that the anonymous victim was “found dead.”

The Murder of Elizabeth Jackson

On the morning of June 4, 1889, three young boys were playing in the Thames near Battersea Park, under the Albert Bridge. They caught sight of an object lapping against the embankment, and were horrified to discover that it was a human arm. They wrapped up the arm and brought it to Scotland Yard, where Dr. Kempster determined it had only been in the water for 24 hours at most. It was wrapped in a garment that was embroidered with the name “L.E. Fisher.” More body parts were found in various embankments throughout the area over the next few days. The coroner, Dr. Braxton-Hicks, observed that the skill used to dismember the body had not been that of a medical professional, but rather that of “a butcher or a knacker.”

A combination of the found garment, a childhood scar found upon the wrist, and the fact that she had been eight months pregnant helped identify her as Elizabeth Jackson. She was from County Cork, Ireland, but was currently homeless and working in the sex trade in London’s SOHO square. She was 24 years old when she died. Immediately, newspapers began to speculate that the Ripper had returned from his several month’s-long hiatus, going as far as to claim that the killer had sent more letters to the publication, but police determined this was very unlikely.

The killer once more displayed a tendency to taunt, as he had tossed Elizabeth’s right thigh over the wall of the Shelley estate—owned by Percy and Mary Shelley, the author of “Frankenstein.”

The final crime is the one most associated with the Jack the Ripper murders, stoking the fires of Ripper hysteria once more. On the morning of September 10, 1889, P.C. William Pennett came upon a woman’s torso under the railway arch on Pinchin Street, Whitechapel. The arms were still attached, though there were no legs or head. These parts were never found. 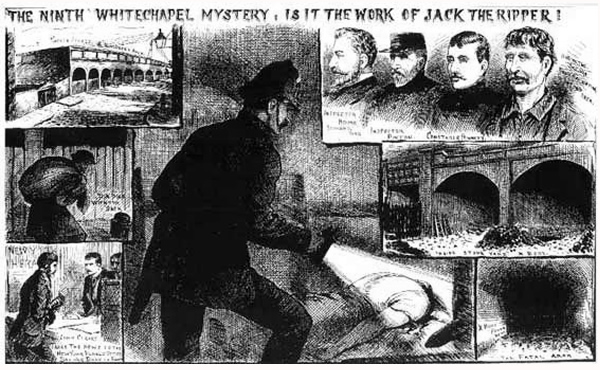 There was  no evidence that the woman had been killed in that location, which makes it a high possibility that she had been killed elsewhere and her remains were left (perhaps strategically?) in the Whitechapel neighborhood. The body was never identified, nor was a cause of death determined. It was interred in an East London cemetery.

Very little can be determined from this series of gruesome murders and dismemberments. Was the culprit a surgeon, a butcher or a knacker? Was it truly Jack the Ripper after all? Was it two, three, or more perpetrators? Who were those poor, unidentified victims? Unlike in the Ripper case, there is no roll of named suspects, only a series of unknown corpses and as many disturbing, unfulfilling investigations and inquests.

Perhaps it is because of this ambiguity is what makes it less popular for study than the Ripper case. Perhaps there are just too many mysteries to handle.

Few fictional documents dare to enter the skull of Saucy Jacky himself. They prefer to trot along on the periphery, showing us all the historical evidence we’ve seen time and time again from the same … END_OF_DOCUMENT_TOKEN_TO_BE_REPLACED

Many people, upon hearing that they are the progeny of a mass-murderer, bury this fact and shy away from it as much as possible. Jeff Mudgett, a lawyer and former Commander in the U.S. Naval Reserve, … END_OF_DOCUMENT_TOKEN_TO_BE_REPLACED

Jack the Ripper: The Forgotten Victims by Paul Begg & John Bennett Yale University Press (March 1, 2014) There are at least four or five victims that we can (mostly) agree were killed by the … END_OF_DOCUMENT_TOKEN_TO_BE_REPLACED