You are here: Home / Ripper Books / Complete History of Jack the Ripper: A Review
47 Shares 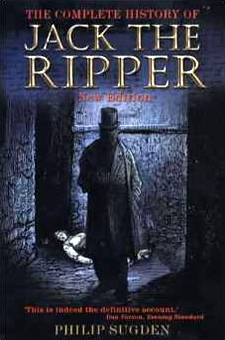 The Complete History of Jack the Ripper
by Philip Sugden

The Complete History of Jack the Ripper

If you are looking for the truth, the whole truth (such as it is) and nothing but the truth when it comes to Jack the Ripper, this comprehensive tome has got it for you in spades. If you have a strongly-held conviction as to the Ripper’s identity or are looking a definitive answer to one of history’s greatest mysteries, then sorry. This is probably not the book for you.

Abhorring melodrama and prioritizing indisputable facts, Philip Sugden presents evidence from the most primary sources available: notes taken by Scotland Yard investigators into the killings and coroners who examined the Ripper’s victims. Despite the academic rigor, or perhaps because of it, Sudgen does not hesitate to show disdain for anyone who sensationalizes the Ripper killings. In fact, having read possibly every book on the subject before its publishing in 1994, he calls out as many theories as possible for the purpose of flaying them to bits.

Of Stephen Knight, author of Jack the Ripper: The Final Solution, Sugden says:

What is disconcerting about the whole episode, however, is the attitude of Stephen Knight himself. His research is now known to have uncovered evidence which proved that the story was untrue. Yet he shamelessly chose to suppress it.

Sugden also reviles even stories originating in the Victorian press with statements like:

Our demolition of these time-honoured shibboleths must not delude us into thinking we have seen the last of them. They will continue to be trotted out by the incompetent and idle, and facts, in any case, have never stood in the way of a sensational theory.

Sugden is not the first to disparage Knight’s “royal theory”, or acknowledge the liberties taken by the Victorian press. It could be argued, though, that speculations are one of the things that have drawn so many people into puzzling over the unsolved mystery of Jack the Ripper. What remains, then, when you suck the conspiracy and mythos from the story of Whitechapel in the late summer and early fall of 1888?

In short, to deprive the Whitechapel murders of sensationalism does nothing to deaden the horror of that fateful time and place. Whenever possible, Sugden directly quotes the autopsy notes from the doctors themselves as well as the investigators present. Every publicly released detail of the butcheries inflicted on the Whitechapel women is made explicit in these pages, as well as the testimonies of permanently-damaged witnesses who discovered the mangled bodies. Detached and clinical truth is almost more frightening than any visual depiction or emotionalized descriptions of spewing blood and sadistic sex mania.

An impressive element of Sugden’s scholarship, also, is that each fact receives equal weight. The comings and goings of each Ripper victim on the night of their murder as well as their origins, their state of health and their family histories are given equal import with the more lurid details of the murders themselves. There is no hint of sadism on the author’s part or preference shown to overblown descriptions of the crime scenes. Sugden honors the victims’ lives as much as he probes into the recorded details of their deaths. This is, thankfully, not to say that excessive background histories of the Whitechapel neighborhoods, the local police force or other less-than-relevant facts are used as padding for those five hundred pages. He also does not hold back when it comes to the true damage done.

Unique revelations of Sugden’s research appear in biographical details that had not been explored before the 1990s. This includes the, as yet, most detailed backstory of Catherine Eddowes, the Ripper’s fourth canonical victim. It also includes comprehensive and direct quotations regarding the revered Detective Abberline’s thoughts on one of the “least unlikely” of Ripper suspects. In keeping with a strict preference for primary sources, the only suspects that Sugden seriously reviews are those who were investigated by police within 20 or so years of the murders. He comes as close as a person with his dedication to only the most well-confirmed facts could go in pointing out that “least unlikely” suspect, who will not be revealed here.

While some who are more used to the fictionalized versions of the Ripper killings may find this to be a dry historical outing, there is a lot to keep a reader glued to the page. In spite of Sugden’s distaste for wild speculation, lamentations of lost original sources and even skepticism of the testimonies of witnesses and theories of contemporary investigators, he is able to express optimism that Ripperology can be rewarding for those who engage in it.

“In the patient study of primary sources,” he says, “the truth — or what survives of it — is there for those who seek it.”

The Complete History of Jack the Ripper is available in hardcover, paperback, and Kindle editions.

Few fictional documents dare to enter the skull of Saucy Jacky himself. They prefer to trot along on the periphery, showing us all the historical evidence we’ve seen time and time again from the same … END_OF_DOCUMENT_TOKEN_TO_BE_REPLACED

Many people, upon hearing that they are the progeny of a mass-murderer, bury this fact and shy away from it as much as possible. Jeff Mudgett, a lawyer and former Commander in the U.S. Naval Reserve, … END_OF_DOCUMENT_TOKEN_TO_BE_REPLACED

Jack the Ripper: The Forgotten Victims by Paul Begg & John Bennett Yale University Press (March 1, 2014) There are at least four or five victims that we can (mostly) agree were killed by the … END_OF_DOCUMENT_TOKEN_TO_BE_REPLACED